The Green Cross Code. The advice given below on crossing the road is for all pedestrians. Children should be taught the Code and should not be allowed out alone until they can understand and use it properly. The age when they can do this is different for each child. Many children cannot judge how fast vehicles are going or how far away they are. Children learn by example, so parents and carers should always use the Code in full when out with their children. They are responsible for deciding at what age children can use it safely by themselves.

A. First find a safe place to cross and where there is space to reach the pavement on the other side. Where there is a crossing nearby, use it. It is safer to cross using a subway, a footbridge, an island, a zebra, pelican, toucan or puffin crossing, or where there is a crossing point controlled by a police officer, a school crossing patrol or a traffic warden. Otherwise choose a place where you can see clearly in all directions. Try to avoid crossing between parked cars (see Rule 14), on a blind bend, or close to the brow of a hill. Move to a space where drivers and riders can see you clearly. Do not cross the road diagonally. 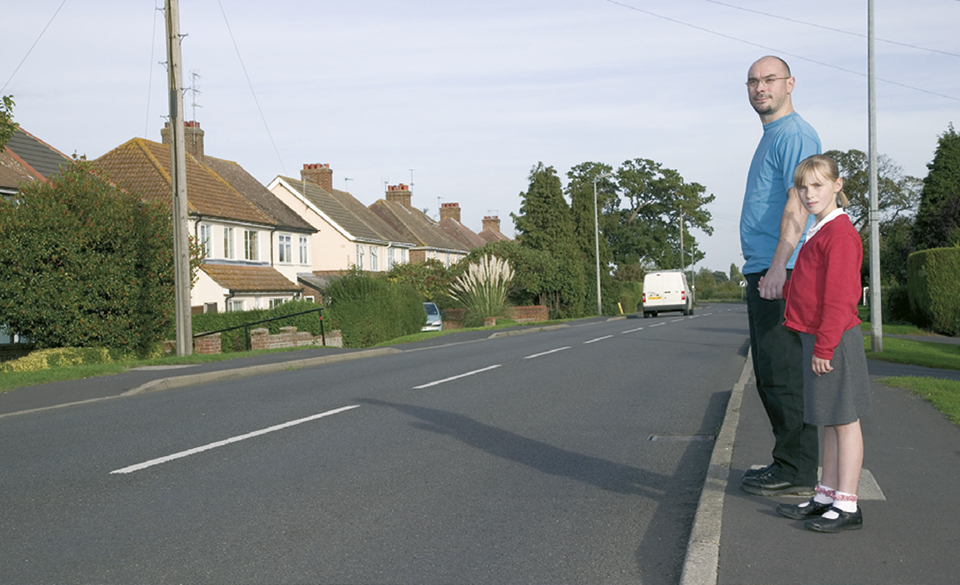 Rule 7: Look all around and listen for traffic before crossing

B. Stop just before you get to the kerb, where you can see if anything is coming. Do not get too close to the traffic. If there’s no pavement, keep back from the edge of the road but make sure you can still see approaching traffic.

C. Look all around for traffic and listen. Traffic could come from any direction. Listen as well, because you can sometimes hear traffic before you see it.

D. If traffic is coming, let it pass. Look all around again and listen. Do not cross until there is a safe gap in the traffic and you are certain that there is plenty of time. Remember, even if traffic is a long way off, it may be approaching very quickly.

E. When it is safe, go straight across the road – do not run. Keep looking and listening for traffic while you cross, in case there is any traffic you did not see, or in case other traffic appears suddenly. Look out for cyclists and motorcyclists travelling between lanes of traffic. Do not walk diagonally across the road.

At a junction. When crossing the road, look out for traffic turning into the road, especially from behind you. If you have started crossing and traffic wants to turn into the road, you have priority and they should give way (see Rule 170).

Pedestrian Safety Barriers. Where there are barriers, cross the road only at the gaps provided for pedestrians. Do not climb over the barriers or walk between them and the road.

Tactile paving. Raised surfaces that can be felt underfoot provide warning and guidance to blind or partially sighted people. The most common surfaces are a series of raised studs, which are used at crossing points with a dropped kerb, or a series of rounded raised bars which are used at level crossings, at the top and bottom of steps and at some other hazards.

One-way streets. Check which way the traffic is moving. Do not cross until it is safe to do so without stopping. Bus and cycle lanes may operate in the opposite direction to the rest of the traffic.

Bus and cycle lanes. Take care when crossing these lanes as traffic may be moving faster than in the other lanes, or against the flow of traffic.

Routes shared with cyclists. Some cycle tracks run alongside footpaths or pavements, using a segregating feature to separate cyclists from people on foot. Segregated routes may also incorporate short lengths of tactile paving to help visually impaired people stay on the correct side. On the pedestrian side this will comprise a series of flat-topped bars running across the direction of travel (ladder pattern). On the cyclist side the same bars are orientated in the direction of travel (tramline pattern). Not all routes which are shared with cyclists are segregated. Take extra care where this is so (see Rule 62).

Parked vehicles. If you have to cross between parked vehicles, use the outside edges of the vehicles as if they were the kerb. Stop there and make sure you can see all around and that the traffic can see you. Make sure there is a gap between any parked vehicles on the other side, so you can reach the pavement. Never cross the road in front of, or behind, any vehicle with its engine running, especially a large vehicle, as the driver may not be able to see you.

Reversing vehicles. Never cross behind a vehicle which is reversing, showing white reversing lights or sounding a warning.

At night. Wear something reflective to make it easier for others to see you (see Rule 3). If there is no pedestrian crossing nearby, cross the road near a street light so that traffic can see you more easily.

← Previous: General Guidance
↑ Return to category menu
Next: Crossings →
Vehicle Driving Test Practice
Car Test Practice
Motorbike Test Practice
Highway Code
Rules
Example Illustrations
Annexes
©2021 MyTheoryTest.com
webmaster@mytheorytest.com
Contains public sector information licensed under the Open Government Licence v3.0.
Privacy Policy
This site uses cookies, which my include using your data to help tailor the adverts to be more relevant to you. By continuing to use this site, you are agreeing to our privacy policy. Ok Learn more about how we and our partners collect and use data.
Privacy & Cookies Policy